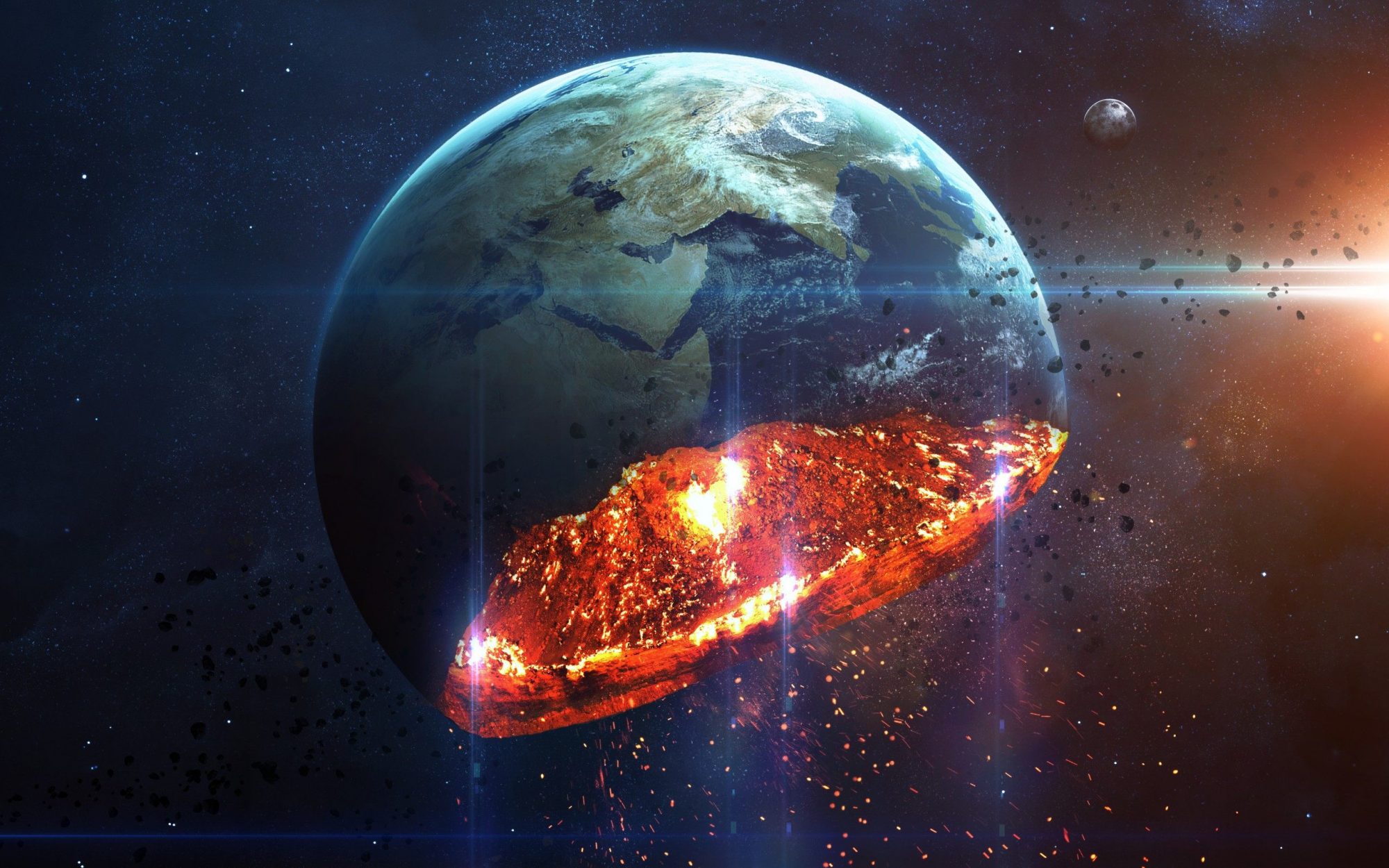 There’s been a lot of talk about a major calamity striking the Earth in the year 2012, on December 21 (or other dates in the year, depending on who you’re talking to) no less. Now, that’s a fairly precise date and that alone should raise a few questions. How can someone make a prediction of an approaching calamity with such amazing precision? In my opinion, the more precise a number is, the more likely it is false. For example, if I told you that 371.346 civilians died in World War 2 as a direct result of bombing, you might be surprised at the detail of my research but the truth is that nobody knows exactly how many people died during World War 2, let alone as a result of bombing.
Okay, so what is this calamity that is going to befall the planet in 2012? Well, the experts making these claims aren’t exactly sure about that. They know the date (but don’t seem to agree on it), but they don’t know exactly what’s going to happen. Some say there’s going to be some kind of shift of Earth’s magnetic poles, or some kind of planetary or even galactic alignment. Others are talking about a comet impact, earthquakes, solar flares, a rogue planet or even a brown dwarf (a star with not enough mass to sustain fusion) wandering through our solar system. No matter the method, we’re all going to die. Or are we?

One of the claims I have seen floating around on YouTube and other places is the claim that the magnetic poles of our planet are going to reverse. In effect, the (magnetic) North Pole would become the (magnetic) South Pole and vice versa. So, should we start running for the hills? Er…no, not quite. While it is true that the magnetic poles of the Earth can reverse positions, they won’t do so suddenly, within a year or so. In fact, it is likely to take hundred or perhaps thousands of years for the poles to completely reverse. And it wouldn’t be the first time the poles have reversed either, they’ve done it before. It won’t have any dramatic effect, other than make your compass go wonky.  And it’s not like that is pointing to the North Pole at the moment either. It is pointing to the magnetic North Pole, which happens to be a couple hundred kilometres from the true North Pole and apparently is currently on its way to Russia at 65km per year. Earth’s magnetic poles have never been stable in the past and there’s no reason to assume they will be in the future. They may reverse someday but there’s no evidence to suggest that they’re going to do so imminently or suddenly. And even if it did, it would not change our lives a great deal. It won’t cause the end of the human species or life on the planet, that’s for sure. Don’t take my word for it, read so for yourself here and here.

So? Seriously, what do you think that proves? A calendar is nothing more than a somewhat arbitrary and artificial way for people to keep track of time, so that they may know when to plant, when to harvest, when the rains will come, when to hold certain festivals and when it’s time to go to the dentist. Do you really believe that because one civilisation chose to end their calendar in 2012, that proves that the world is coming to an end? Of course it doesn’t. The planet isn’t bothered by any timekeeping systems we have come up with. It’s not even aware of them.
What’s more, the Mayan calendar does not end on December 21 of 2012! It merely begins a new period, just as we do each year on January 1, each decade, each century or even each millennium. It doesn’t bother the Earth one little bit. For more, see here.

3. Indian mythology holds that we are at the end of Kali Yuga

Again: so? Just as our planet is not bothered by Mayan timekeeping, it is equally unaffected by Indian timekeeping. It is simply humans attaching significance to a human construct, nothing more. For more on Kali Yuga, see here.

4. The Sumerian “7 tablets of Creation”/Nibiru

Personally, this has to be my favourite. In a nutshell, this piece of evidence rests on the fact that the ancient Sumerians created a series of clay tablets depicting how they believed the Earth and everything else was created. One of those tablets is shown (in part) below. Based on those tablets, it has been deduced that a planet on a highly elliptical orbit will pass through our solar system. You guessed it, in 2012. 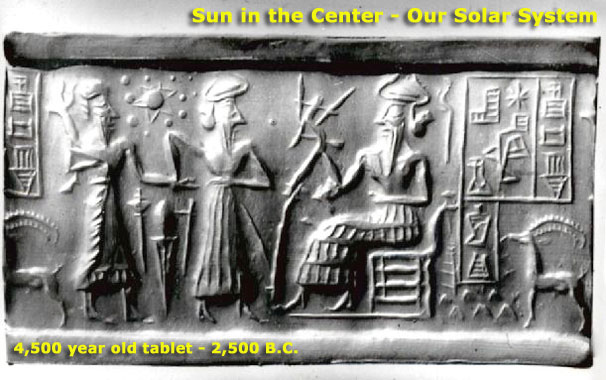 Notice the grouping of spherical objects around which appears to be a star? Well, that is supposed to be a representation of our solar system. Quite frankly, I have no idea what the ancient Sumerians wanted to say when they made this tablet with that collection of objects. I don’t read Sumerian cuneiform and I am not an archaeologist. But then again…the same can be said for Zecharia Sitchin, the man who claimed that this is an image of our solar system, showing the very object of our destruction: the planet Nibiru. Now, Zecharia Sitchin fits in the same category of – shall we say – people with a rather alternative opinion about our history, as Erich von Däniken. In a nutshell, they’re claiming that in ancient times alien visitors came to our planet and had interactions with humans. They don’t have proof that it happened, they’re not trained as scientists and they are not recognized by the academic community as such. So how serious should we take these claims? Not very serious at all, that’s my opinion. After all, it’s bunk, it’s pseudo-science, it’s made up by people with an over-active imagination.

According to a lot of 2012 advocates, the governments of the world are trying their best to keep the approach of Nibiru and our impending destruction hidden. We only know about it because one brave astronomer, working on an Antarctic observatory leaked the information via YouTube.

Let’s examine that statement a bit more closely, shall we? Without even beginning to talk about the so-called leaked information, are you seriously going to believe that all of the world’s governments, or at least the ones with active astronomers, telescopes, science programs and what have you, are apparently successful in hiding this information from the general public? Really? Do I need to mention Wikileaks here? Are you ready to believe that out of all the thousands of astronomers and hundreds of thousands of amateur astronomers out there, one, and only one brave soul decided to go against the united governments of the world and publish the information anyway? And how did the united governments of the world reach all these people? Did they send them an email? Call them? Did a man smoking Morley cigarettes pay them a visit in the night? Did they threaten to kill them if they divulged this information? We’re apparently all going to die anyway, so what difference would that make? If you look at it like that, this statement doesn’t make a lot sense, does it?

5. Crop circles have appeared which tell about the imminent calamity

Well, what can I say about crop circles that hasn’t already been said? We know that most crop circles are man made. Even if we were to find a crop circle which was created using some unknown means – which does not preclude a man made origin – that is still simply a crop circle. Why would it mean anything, simply because it was created in an unknown way? We don’t know exactly how tornadoes are formed, but we don’t attach any meaning to them. And if some unknown entity were trying to send us a message to warn us about any calamity which was going to befall us, why use crop circles? There are better ways to get the message across, I would think.

Nevertheless, these crop circles in particular were translated or rather, interpreted by Mr. Jaime Maussan, Mexico’s leading ufologist. Oh, a ufologist? Well, I am glad we are leaving the realm of pseudo-science. So, we have a few intricate patterns in someone’s crop, we have a ufologist (who, presumably, took a break from studying UFOs) who has interpreted these intricate patterns to mean that the planet Nibiru (a figment of someone’s imagination) is going to interfere with our planet. You may panic…now.

What does it all mean?

Well, in short, it doesn’t mean anything. Some people seem to have gathered a few half-truths, some pseudo-science and some genuine BS, mixed it all together and are scaring the crap out of others with it. Why? Who knows. Perhaps they get a kick out of it. Perhaps (and more likely) they’re making money out of it. You may think that all the ‘evidence’ gathered together (and there’s more than I mentioned above) has any significance but no, it doesn’t. A lot of untruths piled on top of each other doesn’t produce something that is true. I’m just a guy with common sense but these stories immediately set of my BS alert. I think it will be the same for most people with common sense out there but there are also people who are really scared by it. That’s why I wrote this post. I just couldn’t stand the idea that people are scaring others into buying “How to survive 2012” DVD’s, books and what have you. Sure, there will be disasters in 2012 just like in any other year of our history. Floods, earthquakes, violent weather, you name it. But there’s simply not going to be a worldwide calamity that will threaten our very existence on this world. Don’t let any panic mongers tell you different.

One more thing. When I decided to put together this page, I had no idea how much misinformation was out there. It is truly overwhelming. As I began to research some of this stuff more closely, a single website stood out as a beacon of reason amidst a sea of misinformation. That is the site www.2012hoax.org. I’ve linked to them in the post above for their excellent work debunking YouTube videos, but their entire site is an excellent debunking of al the 2012 misinformation about. They’ve done a much better job than I could have done, simply because they really know what they are talking about. Thank you for making that site, people!