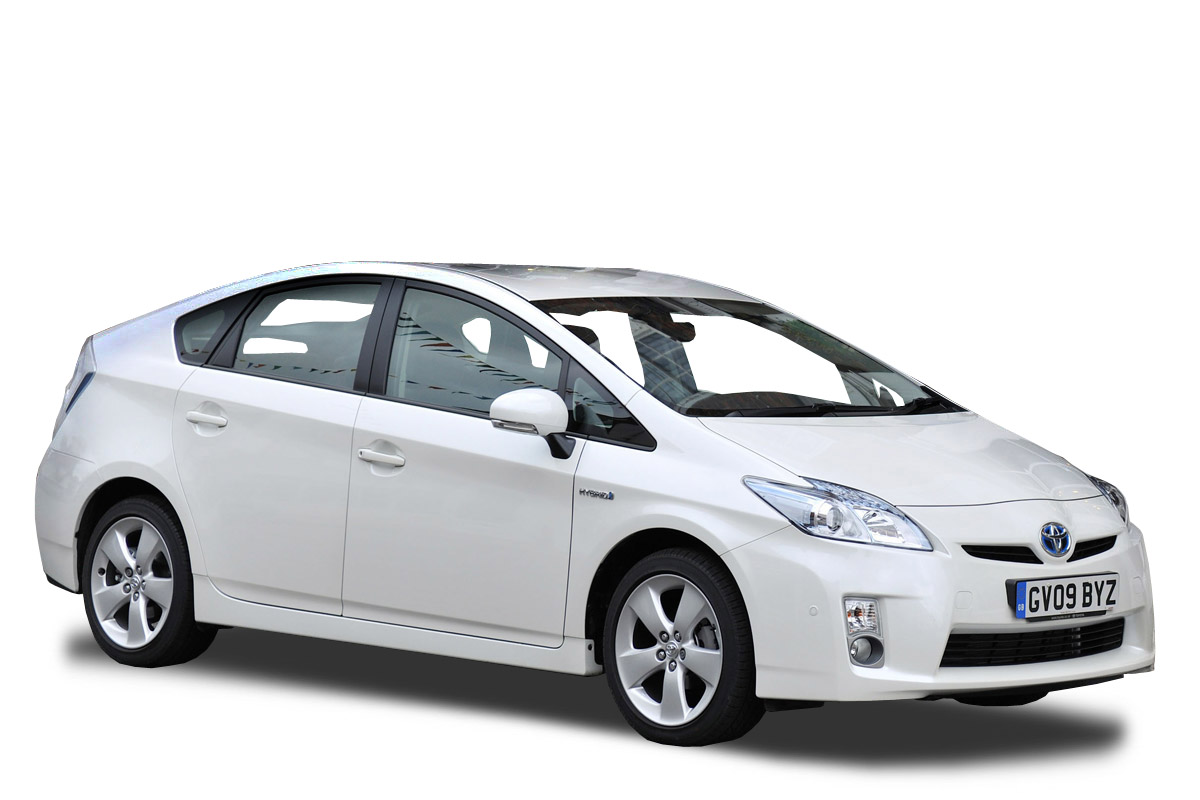 One of the things I have always wanted to do, ever since Toyota launched the Prius, was drive one. Not too long ago, “thanks” to an accident, I had the opportunity to drive a Prius. It was a new model, which Toyota touts as the most advanced car in the world. That raises a person’s expectations. The question is, does the Prius deliver?

Let’s take a look at the exterior of the car, because let’s face, that’s the first thing you see. And let’s also be honest: the Prius is not a pretty car. Granted, it is not a Ford Ka or worse, but it’s not exactly easy on the eyes. The front of the car is not that bad, though I thought the blue accents in the Toyota logo were a bit much. Walking around the car, you notice the fairly high back. In the middle of the rear window is a spoiler (more on that later). At the rear, the roof seems oddly bulbous. From the side and from the rear, it kind of reminds me of a rather fat bumblebee. Not much of a looker.

Sadly, when you get in, the impression of the Prius does not improve. Yes, everything looks futuristic and the head up display is a nice touch. What on Earth possessed the Toyota engineers to move all the dials and indicators to the centre of the dashboard is beyond me. Why do I have to turn my head all the way to the right, taking my eyes of the road(!), just to see if my headlights are on? Had the indicators been in their normal location in front of the driver where they belong, there would have been no need to muck about with a head up display. The car feels very plastic and flimsy. The gear “stick” looks and feels rather like a cheap joystick and one fears it might come off when operated, which makes you grateful the car has CVT. The used material doesn’t feel solid nor does it instil a feeling of safety which is a bit of a pity for a car in this price range. It feels like a much cheaper car.

Toyota claims that the Prius offers superior handling and is a joy to drive.  That it has impressive performance and has temperament. And they’re right. The Prius has all the temperament of a raging bull. A raging bull that has just received the fatal stab of a matador in a bull fight, to be more precise. It just won’t go. The Prius has 136 horsepower and should accelerate to 100 kph in 10.4 seconds which is not that fast. However, if you drive this way, you won’t be driving economical or environment friendly, which is touted as the Prius’ biggest advantage. If you use the accelerator pedal more conservatively, the Prius more or less trundles along with the other traffic. In short, it not only looks like an overweight bumblebee, it accelerates much like an overweight bumblebee as well.

Worse than the accelerating is the handling. Just the slowness, I could probably learn to live with but the sluggish and sloppy handling is a real killer for me . The Prius handles very indirectly. It’s hard to get a feel of where the wheels are in relation to the rest of the car. The front wheels feel like they’re somewhere in front sort of, but the rear wheels…well, they might as well be in the boot of the car or have fallen off. You get no feedback of where they are exactly. The suspension feels very wobbly and soft. The Prius is not a small car and with the sloppy handling and poor feedback, it feels even bigger and more ungainly.

It gets worse, though. The Toyota Prius offers rather poor visibility. You can’t really make out where the front of the car is, which makes parking troublesome. I have parked bigger cars than the Prius with much less difficulty. The view through the rear window however, is absolutely dismal. Right across the middle of the rear window is the spoiler I mentioned previously. Objects that are more than a few metres away, are completely obscured by it. It is hard to see other cars behind you. It really begs the question what the engineers were thinking when they put the spoiler there. It would have been okay if it were higher or lower. But they put it right in the middle where it is permanently in the way.

The hybrid propulsion offers three different modes. It has full electric propulsion, which allows you to drive very economically and with no emissions whatsoever. However, you have to keep the speed under 50 kph and your range is reduced to 2 kilometres. Really only useful for short bits in the city or to impress your friends with how quiet the car is.
Next, there is economy mode. In economy mode, the car uses the petrol engine as well so you can go faster and further. However, it is painfully slow in this mode. The performance is of course nowhere near the maximum of what the car is capable of because it is trying to conserve energy. I have used this mode the most as I imagine most people would who use the Prius for environmental or economic reasons. I feel though that the performance is really below par for a car of this size. It certainly is no joy to drive in economy mode.
Finally, there is PWR mode. According to Toyota, this would maximize the power output of both petrol and electric engine, giving the car swift performance. And granted, the Prius is more responsive in this mode and can be quite quick speeding away from a standstill at the traffic light. It still doesn’t qualify as fast, but it does a decent job. However, economy is pretty much out the window driving like this, which defeats the purpose of driving a hybrid powered vehicle. You’d be better of buying another car in this mode.

So, after all the disappointments above, is the Prius really economical? Well…no. Not really, anyway. Toyota claims that the Prius will have a range of about 1200 kilometres on a full tank of petrol. The tank can contain about 45 litres of petrol, so that amounts to a fuel consumption of roughly 1 litre for every 26 kilometres travelled. Pretty impressive, right? It would be, if it were true. Those numbers must have been obtained under perfect testing conditions, because under normal operating conditions you don’t get that kind of mileage out of your Prius. As stated, I used the economy mode on the car most of the time and drove it fairly conservatively. However, after only 800 kilometres, I had to go and refill. It wasn’t fully empty yet, and I might have been able to squeeze out another 50 ~ 75 kilometres so let’s be fair and say the range on a full tank was 900 kilometres. While this is pretty good for a normal, petrol driven car, it is no big deal for your average diesel. Plus, your average modern diesel will provide you with a whole lot more fun while driving it because of its better performance.

So, is the Prius worth it? I think that if you have read this far, you already know my answer to that. No, it isn’t. Not for me anyway. I don’t like the look of the thing, but that is taste. I don’t like the driving, the handling, the poor visibility through the rear window, the location of the instruments and the sacrifices I have to make in order to be economical. Personally, I feel the Prius is mainly bought by people looking for a tax benefit and who don’t care much for what they drive as long as it moves. And the Prius does move…just not very well.