This is the second article of an intended series during which I will explain why I am an atheist. The first part can be found here. Much of this is based on my own, personal thoughts and experiences with religion, mostly Christianity, because that is the religion I have been exposed to the most. While this is not intended as an attack on people of faith, you may wish to stop reading if you can’t handle opposing viewpoints very well or if you don’t like your faith challenged. This second part will look at my problems with the concept of original sin.

Being a school boy attending a Catholic school, it was mandatory to regularly attend mass. I remember that I always found that a rather dreary event. Sitting on a hard wooden bench, singing rather awful songs and even getting down on both knees to pray. It never appealed to me. What I particularly disliked was admitting that I was a sinner, that somehow I shared in the responsibility of the original sin. This always struck me as rather unfair and unjust. After all, it all supposedly happened many years before I was born and I had no choice in the matter. And yet there I was, being told that Jesus was crucified because I was sinner. And I wasn’t, this much I knew. I was if anything, perhaps too good a boy. However, this didn’t seem to matter to the church. No matter how good I was, in the eyes of God I was a dirty sinner. As we will see though, the concept of original sin is horribly illogical. 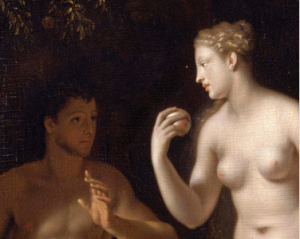 It’s hardly possible to find a person in this world who is not familiar with the story of what is called “the fall from grace”. In short, Adam and Eve lived in a perfect world, known as the Garden of Eden, enjoying friendship with god. However, trouble was there from the start. God had given them instructions that they should not eat from the fruit of the tree of knowledge of good and evil. The devil, in the form of a serpent seduces Eve and convinces her to eat the fruit anyway. As a result, God becomes very angry, and decides to punish the snake, Adam, Eve and all their offspring for the rest of time. That’s the Catholic version, of course. Other versions of the story differ with regard to its meaning.
At first glance, you could say that Adam and Eve were disobedient to God and thus He was right to be mad. However, if you consider the story carefully, things change dramatically. First of all, if Adam and Eve weren’t supposed to eat the fruit, why did God put the tree inside the garden of Eden in the first place? Why not put it somewhere else, outside of their reach? In fact, why did God create the tree at all? Surely God himself had no need for a tree bearing the fruit of knowledge of good and evil? Next, consider that God is all-powerful, all-knowing and omnipresent. That means that God was there when the snake tempted Eve and He could have prevented it but didn’t. If only God had created a Holy Nanny to watch Adam and Eve in the garden of Eden, none of this would ever have happened. It is even worse though. Since God is all-knowing, He knew in advance what would happen. Yet with this knowledge, He did nothing to prevent it from happening. And yet, after the fact, God throws a fit and pours down plenty of heavenly wrath on Adam and Eve and their offspring (supposedly the rest of humanity). As we have just seen though, if it is not God’s fault, it is at least his responsibility. The story of the fall is not about the wickedness of man. Instead, it is the first documented case of bad parenting.

Another thing that bothers me about this story, and bothers me greatly, is the fact that when God decides to punish Adam and Eve, he doesn’t just punish them. He punished them and their offspring for all eternity. Not only is this completely out of proportion (he sentences them to die, among other things), it is also unfair on those unborn generations. I had no part on the original sin. I wasn’t even born. How is it morally justifiable to punish someone who had no part in the crime, who wasn’t at the scene of the crime and who wasn’t even alive then? Imagine the police would come knocking down your door to arrest you for the murder of Julius Caesar. How fair would that be? Well, according to the logic in this story, it would be perfectly fair. Is this completely disproportionate punishment really the work of a being who is said to be loving, good and kind? And why would it bother God so much if humans had knowledge about good and evil?

Fortunately for us, many, many generations later, God apparently thinks he might have been a bit too harsh on us so he decides to offer us a second chance at an eternal life with him. How does he do that? Well, God comes down to Earth in the form of a man (Jesus), takes the sins of the world upon himself and dies for us so we can be forgiven. But why? It’s a completely pointless exercise because if God wants to forgive us at that point, why doesn’t he? What’s stopping God? He was the one who got angry with humanity (well, two people), he was the one who decided to punish humanity so why doesn’t he just forgive us? Why this elaborate display of coming down from heaven and dying on our behalf? It makes no sense at all. After all, if I’m angry with someone and want to forgive that person, I can just do it.

Of course, as Christians are happy to tell us, people who reject the salvation through Jesus remain condemned to die and burn in hell for all eternity. Again, for a sin in which they had no part, had no chance to prevent and had no choice. God loves us as a father and He created us in his own image, so the believers will tell you. However, you are forced to ask the question that if we are His children and He loves us as a father, how can He possibly justify condemning people to burn in hell for all eternity? Which loving parent could set a disobedient child on fire, even for just a second, even if that child denounces the parent? Are these the actions of good, moral being? No, they are not. These are the actions of a jealous psychopath, not of a good and loving God. A God that is not worthy of our worship, only worthy of our fear.

Come to think of it, God and the devil are supposed to be enemies. If so, why would the devil even torture those condemned by God? Isn’t the enemy of my enemy my friend? Non-believers and the devil should get along brilliantly! So no need to worry there, glad we have that sorted out.

Countless generations of children had it pounded into their head from the pulpit: you are a sinner, in the eyes of God you are contemptible and nothing you do can make you worthy of His salvation. You are solely dependent on His grace. How is it possible that a child, innocent from birth, be guilty of any sin that demands death as the only suitable punishment in the eyes of God? How has this child, that barely understands the concept of sin, offended God? The doctrine of original sin is a disgusting form of scare-mongering, that has taught countless generations of children that they are unworthy and damned instead of teaching them self worth. It has filled the minds of people with fear and driven them into the arms of a greedy church that was all too happy to receive them. In truth though, the entire concept of original sin is nothing but a gargantuan effort to shift the blame away from God and onto his so-called children. As we have seen, if God is as omnipotent and all knowing, there is no one to blame but He himself because with intent and foreknowledge, He engineered and allowed the fall from grace to happen. We were set up. That isn’t love, nor is it good, nor is it moral. It also makes no sense at all. It is in fact unbelievable.