I came across the article (now removed, apparently) “5 ways to stump an atheist” written by Richard Bushey on his site Therefore, God exists. In the article, Bushey lists 5 questions to stump an atheist, although claiming there are many ways to do that. Of course stumping someone isn’t that hard. Just say something that they don’t expect or can’t wrap their head around. That doesn’t mean that what you said is clever or even true. It just means the other person doesn’t have a ready answer. Stumping someone doesn’t prove anything or secure you a win in a discussion. So would an atheist really be stumped? Hardly!

Let’s dive right into these 5 ways to stump an atheist. I’ll post Bushey’s argument first and then respond to it below.

The problem of evil 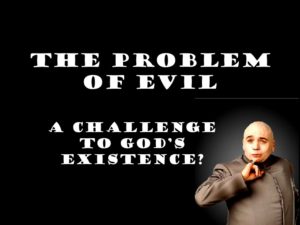 The first point that Bushey raises, doesn’t work for several reasons. If it is going to stump anyone, it’s because it is staggering in its immorality. I don’t even want to get into the argument that when one is able to prevent suffering, one is morally bound to do so. Anything less would be immoral. Since an all-powerful god is nothing if not able, the question of why there is evil and suffering if the Christian narrative is true, is actually a fair question.
First of all, what motive would a truly loving, all-knowing and all-powerful god have to allow pain and suffering?
Secondly, inquiring about the motives of a being who’s mind no one can know, whether theist or atheist, isn’t a useful argument. It’s actually an argument from ignorance.
Thirdly and most disturbing are the examples of pain and suffering that Bushey uses. When atheists say that a loving god would prevent evil, they’re not talking about someone clipping the nails of the dog or a parent getting a child vaccinated. These are mild discomforts and annoyances. Atheists refer to genocide, torture, natural disasters, famine and the like. Is getting vaccinated on par with being a genocide victim in Bushey’s morality? I certainly hope not.

The second question intended to stump atheists is about what evidence an atheist would accept as evidence for god’s existence.

2 – Ask what they would accept as evidence for God’s existence. Atheists usually say that they are just sitting around waiting for evidence for God’s existence. When evidence is provided, they will believe. Since there is no evidence, they refuse to believe. But David Silverman seemed to suggest that there is no evidence that he would accept. I asked him, “what is the difference between a God of the Gaps argument, and a deductive argument leading to the conclusion that God exists?” He said that they were the same thing. Silverman does not accept deductive arguments leading to the conclusion that God exists. He sweeps them under the rug, hastily labeling them ‘God of the Gaps.’ Christopher Hitchens similarly said that there is nothing that would change his mind. But, how can you ask me to provide evidence, if you do not even know what you are asking for? So, what would you accept as evidence? STUMPED.

Well, I can not speak for David Silverman or Christopher Hitchens but I don’t need to since this is not a difficult question at all. The answer I’d give is simply: any evidence that would hold up in the court of science as evidence for the existence of god. That being the case, the likelihood of the existence of god doesn’t look very promising. Basically, religion has lost every major discussion with science since the Enlightenment. Never has a scientific explanation of a phenomenon been superseded by a religious explanation. It seems highly unlikely now that science will find your Christian god hiding behind the veil somewhere.

Next up, Bushey accuses atheists of being in denial about miracles, while in the same paragraph saying that “real miracles – cannot happen”. Perhaps he was trying to say something else but let’s look at the argument anyway.

3 – Ask if they would believe in miracles if they saw one. David Hume suggested that if a wise man is to see a miracle, he ought not believe in it. That seems to be the stance of the modern atheists. Thinking themselves intellectual elitists, they will ask questions like, ‘why cannot God heal amputees?’ The suggestion is that the miracle-workers roaming around are just playing magic tricks. But real miracles, like the healing of an amputee, cannot happen. So if the atheist saw a miracle, they would not believe it. If there was cold, hard evidence of the supernatural right before their eyes, they would still find a way to a deny it. A friend of mine told me that if the clouds randomly formed the sentence, ‘The Bible is God’s word,’ he still would not believe it. This is not rational skepticism. It is outright denialism. That is what atheism is. Yet they do not want to admit that. So ask them, would you believe in miracles if you saw one? STUMPED.

Again, I am hardly stumped by this question. First of all, I’d ask you how you’d define a miracle. For something to be a miracle, I’d say that not only would it need to be inexplicable by science or even contrary to science, it would also have to be the case that the only viable explanation would be that divine intervention took place. Simply being inexplicable would not be enough. There are many things that science does not know or can not presently explain. How would we establish that divine intervention took place or was likely? As Carl Sagan said: “extraordinary claims require extraordinary evidence” or as David Hume put it: “No testimony is sufficient to establish a miracle, unless the testimony be of such a kind, that its falsehood would be more miraculous than the fact which it endeavors to establish.”

The problem is exactly that “cold, hard evidence of the supernatural” is so hard to come by. We may see something that seems miraculous but it is much more likely that we are the victim of a misunderstanding or a lack of understanding of the phenomenon.

What does Bushey mean when he says that “real miracles , like the healing of an amputee, cannot happen”? Is he denying that miracles are real? If so, I fail to see the point of this question entirely.

The cause of nature

We’re moving onto origins now, with Bushey claiming that nature cannot cause itself.

4 – Ask them if the cause of nature could be natural. The atheist will usually want to say that everything in the universe can be explained in natural terms. But what about nature itself? A man cannot be his own father. Nature cannot cause itself. It did not exist prior to its’ existence. Before nature existed, it had no causal properties. Therefore, there must have been cause beyond nature to bring it into existence. The cause of nature, therefore, must be supernatural. Nature could not have caused itself to exist any more than a man could be his own father. So ask the atheist if the cause of nature could be natural. STUMPED.

Bushey here is assuming the conclusion of his argument that nature cannot cause itself to happen. He is also using a false analogy since a man and the entire realm of nature are two completely dissimilar things. What is true for one, isn’t necessarily true for the other.

Lastly, Bushey goes into the question of should people who do bad things be punished. As above, the argument is poor and rather silly.

Like I said, it is a rather poor argument and it seems to indicate that Bushey doesn’t understand his own theology. Yes, of course people who do bad things deserve some form of punishment. The doctrine of hell however, doesn’t concern people who do bad things, it teaches that everybody deserves hell. The only exception is for people who accept Jesus as messiah. You don’t need to be a good person to go to heaven, you just need to accept Jesus. You don’t need to be a bad person to go to hell, you just need not accept Jesus. God doesn’t punish based on your actions but on your belief, which is why a serial killer who accepts Jesus moments before execution will go to heaven, whereas a charitable person who does not believe in Jesus will go to hell anyway. It is also why the doctrine of hell is so morally repugnant.

Richard Bushey boasts at the bottom of his list of 5 ways to stump an atheist that “Atheists are afraid to comment on this article because they are stumped by all of these questions.” Well, that hardly appears the case now does it? Not only have I commented on his article, I’ve written an entire article in response and I haven’t been stumped once.