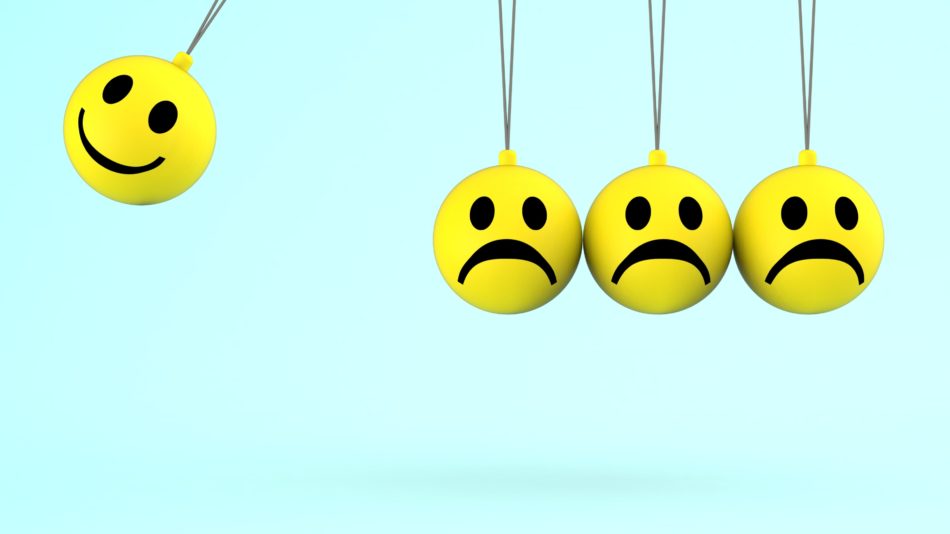 Columbus wouldn’t have made it to the Americas if he had thought he’d never get there or how arduous and dangerous the trip was going to be. Einstein wouldn’t have made it out of the patent office if he had been gloomy and doubtful about his theory. And Robert Oppenheimer would never have been able to ready the A-bomb if…wait a second. I know this is an extreme example, but maybe we’re on to something. Perhaps being positive all the time is not such a good thing?

These days, people always tell you that you have to think positive. No matter what happens, don’t look at the negative. We’re not even allowed to call something a problem any more. Problems have become challenges. A calamity becomes an opportunity. We must always look at the silver lining and forget about that looming, black cloud. The doctor told you that you only have 6 months to live? Well, at least you have more or less an exact life expectancy. Your wife divorcing you? Well, you have the opportunity to meet someone new. Getting fired? You’re on your way to a better job!

Often times, this positivism is just downright foolishness. There is hardly a positive side to the doctor telling you that you only have six months to live. Going through a divorce is usually a very negative experience and being fired usually means plenty of problems. So where does this positivism come from, if it is often foolish?

As it turns out, this positive attitude has long been known to psychologists. They’ve even found a name for it, those clever-clogs: the optimistic bias. Our brain is apparently made in such a way that it favours positive information. This is where the “that could never happen to me” idea comes from. People have a tendency to severely underestimate the risks they face in life. Other people get cancer, but I won’t. Other people have car accidents, but I won’t.

Evolutionary speaking, this makes a lot of sense. People had to take great risks in order to get their livelihood. If early man had spent all his time fussing about whether or not he should take the risk to go out hunting, we would have died out a long time ago. We have to actually believe we won’t get hurt, otherwise we would not take risks. This is also the reason why people never believe you when you tell them something negative. Your boss simply doesn’t hear you when you announce you can’t meet the project deadline.

So where’s the drawback, you may think. Isn’t it good to stay optimistic. As it turns out, no this isn’t always the case. Because of our optimistic bias, most of us are not able to assess risk accurately. Studies have shown that people grossly underestimate the risk of them contracting a serious illness, for instance. It has also been shown that people who have a more pessimistic outlook in life, usually have more accurate expectations of the future. And they will be disappointed less when their expectations come true. Pessimists may also work harder to overcome perceived negative results. So next time you hear someone saying some negative things about the future, perhaps you would do well to pay attention. They may have a point!