Scientists find translucent fish in a wedge of water hidden under 740 meters of ice, 850 kilometers from sunlight

An absolutely astonishing find from the web edition of Scientific American. In what has to be one of the most remote and extreme locations on Earth, scientists have not only found microbial life but actually discovered a population of fish. It’s hard to say how long this miniature ecosystem has been cut off from the rest of the world but it’s possible it has been ever since Antarctica has been covered by ice. That would make it about 34 million years!

It’s hard to imagine what these animals have been feeding off of for all that time and the team making the discovery hasn’t been able to answer that question as of yet. It’s possible the ecosystem is sustained by hydrothermal vents. 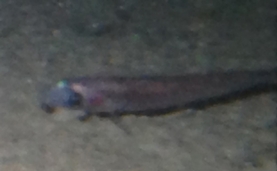 I was glad to come across this article because just the other day I was watching this documentary about the history of our planet. In it, they showed they explained the Snowball Earth hypothesis, meaning that at least once during it’s 4.5 billion year history, Earth may have been covered by a vast ice sheet for several million years. I couldn’t help wonder at the time of watching how life, which had only just begun, could have survived a period of millions of years on a frozen planet covered in a thick ice sheet blocking out all sunlight and warmth. It seemed somewhat incredibly to me, though I imagine that if some life forms can survive in the harsh environment of outer space, a frozen planet wouldn’t be that much of a stretch.
However, this find shows that not only can microbial life survive trapped underneath the ice, even more complex life forms like small crustaceans and fish can survive under certain conditions. So while Snowball Earth may have looked barren and lifeless from space, life underneath the ice could have hung on and diversified. It’s somehow gratifying to think that we might be the descendants of these extreme survivors!

I use cookies on this website to give you a better experience by remembering your preferences and repeat visits. By clicking “Accept”, you consent to the use of ALL the cookies.
Please note that I will never sell or otherwise share your personal information.

This website uses cookies to improve your experience while you navigate through the website. Out of these, the cookies that are categorized as necessary are stored on your browser as they are essential for the working of basic functionalities of the website. I also use limited third-party cookies that help me analyse and understand how you use this website. These cookies will be stored in your browser only with your consent. You also have the option to opt-out of these cookies. But opting out of some of these cookies may affect your browsing experience.
Please note that this site is free of advertising, so you will not receive third party advertising cookies, no matter if you consent to them or not.
Necessary Always Enabled
Necessary cookies are absolutely essential for the website to function properly. These cookies ensure basic functionalities and security features of the website, anonymously.
Functional
Functional cookies help to perform certain functionalities like sharing the content of the website on social media platforms, collect feedbacks, and other third-party features.
Performance
Performance cookies are used to understand and analyze the key performance indexes of the website which helps in delivering a better user experience for the visitors.
Analytics
Analytical cookies are used to understand how visitors interact with the website. These cookies help provide information on metrics the number of visitors, bounce rate, traffic source, etc.
Advertisement
Advertisement cookies are used to provide visitors with relevant ads and marketing campaigns. These cookies track visitors across websites and collect information to provide customized ads.
Others
Other uncategorized cookies are those that are being analyzed and have not been classified into a category as yet.
SAVE & ACCEPT
Loading Comments...