This is the third article of an intended series during which I will explain why I am an atheist. The first part can be found here,, the second part is here. Much of this is based on my own, personal thoughts and experiences with religion, mostly Christianity, because that is the religion I have been exposed to the most. While this is not intended as an attack on people of faith, you may wish to stop reading if you can’t handle opposing viewpoints very well or if you don’t like your faith challenged. This third article will look at how religion fails to make good on things promised.

Before beginning my argument, I have a confession to make: I used to believe in God. I sincerely believed that God was real, that He was watching out for me, that I was saved because I had accepted Jesus into my heart and had access to an eternal afterlife. How did I come to believe in God? Truth be told, I was moved by the Jesus myth. I wanted the peace of mind that belonging to faith gives. I wanted to feel special and chosen. And for a while there, I did. So what happened that caused religion to loose it’s hold? There is but one, single reason for that and that is the Holy Bible. It is one thing to sit in church and listen to sermons and be moved by the inspirational words of a pastor or priest. However, when you begin to read and study the Bible in earnest, you are forced to wonder about certain things. You are forced also, to ask yourself some serious questions. As I said in the first article, I value the truth and am allergic to bullshit. When you are reading the Bible earnestly, you invariably discover that things don’t add up. Discrepancies, contradictions or things that are clearly wrong when compared to the knowledge that we have today. If the Bible is wrong, that raises some points, doesn’t it? After all, it’s supposed to be inspired by an all-knowing God. It should be flawless or at least far beyond anything that humans could ever write. Instead when you read it, it appears to be nothing beyond what you’d expect of a book written in a time when human rights were virtually non-existent, our knowledge of the world dim and superstitions manifold.

Enough about the many flaws of the Bible for now though, those could very well be the subject of a future article. I am mainly concerned with one verse of the Bible in this article and that verse contains a promise that Jesus makes to his disciples in John 14, 13 -14: “And whatsoever ye shall ask in my name, that will I do, that the Father may be glorified in the Son. If ye shall ask any thing in my name, I will do it.” Jesus promises that whatever his followers ask for in His name, He will grant them that for which they ask. There are no terms and conditions, you simply need to ask in Jesus’ name.
A little while before the first seeds of doubt were firmly planted into my mind, one of our loved ones fell ill, seriously ill. Cancer of a most serious kind. So what do Christians do when one of their loved ones falls ill? They pray for that person and that’s what we did at home. Every single day we said a prayer for this person. And since she was a Christian too, she prayed. Her church prayed. Our church prayed. I am not exaggerating when I say that in the period when we first learned of her cancer and her untimely death some 2,5 years later, people offered up thousands of prayers in Jesus’ name for her to get well. And towards the end, when it seemed she would loose her battle with cancer, we prayed for her end to be easy and painless. All these thousands of prayers were offered up in Jesus’ name. And what happened? It made no difference whatsoever. Not even the prayers for an easy end were granted. This is what made me wonder. How was this to be reconciled with John 14, 13-14?
Similarly, after my conversion to Christianity, I began praying for a personal problem I was facing. My prayers were earnest and all were done in Jesus’ name. Yet nothing happened. Again, this non-answering of prayers was in direct contradiction to the words of Jesus. While I could imagine God not answering my personal, private prayers for whatever personal failing or shortcoming He might find in me, the same could not presumably be true for all the others who prayed for our loved one struggling with cancer. What then was I to make of this?
Another instance when prayer failed to work entirely, was when I visited a colleague at home, terribly ill with cancer and in a lot of pain. She was at death’s door and clinging to anything that gave her hope. I offered to pray with her and she accepted. I prayed, a long and heartfelt prayer that she be restored to health. She died a week later, at Christmas of all time. Clearly, prayer wasn’t working for me. Which kind and loving God would take away a woman in the midst of her life, with a husband and teenage child?

After some weeks of doubt, I turned to our pastor and presented him with my problem. He was kind and sympathetic but his answer ultimately boiled down to one statement: “We can not know Gods plan but God has a plan for each and everyone. We must trust him and accept his will.” This answer blew my faith out of the water. First of all, it is not an answer to my doubts in any way. More seriously though, this is having your cake and eating it too. Your prayer comes true? Glory be to God, it’s a miracle. Your prayer wasn’t answered? We can not know Gods plan. This offers nothing in the way of an explanation. It’s so obvious when you look at it logically. You ask something in God’s name which Jesus promised would be answered, except it doesn’t get answered. Presuming that Jesus was who the Bible says he was, there are only a few possible conclusions:

As you’ll note, in all these cases, praying is pointless. If God doesn’t care, He is simply going to ignore you. He is also not a benevolent God if he doesn’t care. If God cares but is unable to do something, you are wasting your time and his time too. In fact, he wouldn’t even be God if he is unable to help. If God has a secret master plan, then prayer is equally pointless because if the plan has already been laid out at creation, why would it be altered by the feeble prayers of people? And of course if God doesn’t exist, nothing would happen by praying to Him. Ergo, prayer is useless in all these cases. Don’t take my word for it though, take it from my buddy Epicurus. He had thought up the same argument, more or less, before Jesus supposedly died on the cross. 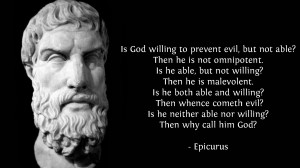 At this point, I should direct you to some interesting scientific research on the effectiveness of prayer, for instance here and here. To summarize this and other research, no significant effect has ever been produced in these studies. What does that say about a God who according to believers is able to work miracles? Does he suffer from performance anxiety? Doesn’t he wish to scientifically prove that he is real and at work in the world? Or does it simply mean that he is unwilling or unable to perform the miracles promised by Jesus? Whatever the reason, prayer doesn’t work.

For the time I had faith, for the time I believed I was saved and part of God’s family, it felt good. In the end though, the total lack of real world effect of God or Jesus or Holy Spirit in my life, forced me to face the facts that in the back of my mind I think I knew all along: you’re fooling yourself. You have allowed yourself to be brainwashed by nice sounding promises and hopes coming from well-meaning but ultimately deluded people. It’s a virus and the sooner you manage to purge yourself of it, the better.

When I turned to the Internet for anti-religious standpoints, wanted to see how others had dealt with the questions and the doubts, I stumbled across this man: Christopher Hitchens. Never before had I heard a man so articulate, so precise and so meticulous, cut down religion, dogma and faith. There are many clips and full length debates featuring him on Youtube, the one below is just a brief example but one I happen to like. I decided that if men of this calibre could do without faith, so could I. I was and am an atheist.

Update: This blog post has been updated with a video by Hemant Mehta, who writes at friendlyatheist.com. It deals with similar subject matter concerning prayer.