Today, I received an email from Marietje Schaake, MEP and member of the INTA committee. She announced that she is organizing a stakeholder hearing concerning ACTA on April 11, since too many half-truths have been spread concerning ACTA, according to her.

But let’s hear from Marietje Schaake herself.

In the last few months I have received hundreds of emails about ACTA. Thank you for sharing your thoughts and voicing your concerns! I can assure you that the emails, protests and general critisism (sic) of ACTA have had a huge impact in Brussels. It looks like the European Parliament will hold it’s decisive vote in the week of 11 – 14 June.

However, ACTA is not dead yet. Several committees in the European Parliament will be preparing their opinions about ACTA in the coming months. The lead committee (international trade, of which I am a member), will likely vote on its main opinion about ACTA at the end of May. The whole Parliament will have it’s decisive say in June.

In order to make sure ACTA does not become a reality, we need to have a fact based discussion. Too many half-truths about ACTA have been spread, which has not helped the debate. That is why I will be organising a stakeholder hearing on April 11th, where several highly respected organisations will explain their critisism (sic) on the ACTA treaty. Please find the poster below. You can attend the hearing, or follow the proceedings online via http://www.tinyurl.com/ACTAhearing. 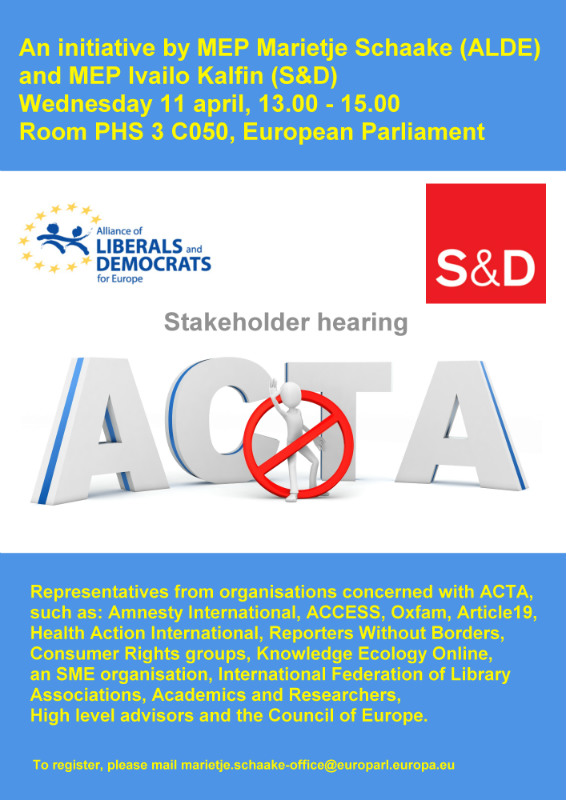 If you enjoyed this article, you may also like to read: