When I woke up this morning and checked my Twitter feed, I could scarcely believe my eyes. I had to rub them to make sure I wasn’t still dreaming. It seems that April Fools’ comes twice this year.

The first shocker of the day is that according to a new book, British PM David Cameron put his family jewels in the mouth of a dead pig, apparently during some kind of ‘initiation ceremony’, The Independent reports. The topic trended on Twitter with the hashtag #piggate. Of course it was the reason for numerous jokes and merry-making.

As much fun as making fun of the PM and a pig is, I’m afraid it will push something else far more sinister out of the news. That is the news that Saudi Arabia has been chosen to head a key UN Human Rights panel that selects top officials who shape international human rights standards and report on violations worldwide. Understandably, this has sparked a fury of protests and cries of disgust. 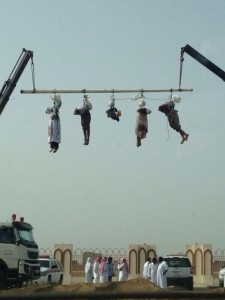 Saudi Arabia has a very poor track record when it comes to human rights. Since the beginning of this year, the country has stepped up the number of executions dramatically, posting a job advertisement looking for extra executioners to cope with the increased work load. People are being executed at a rate of 1 every 2 days and those executed include people who were under age at the time of sentencing and those with mental disabilities according to Amnesty International. Among the “crimes” deemed worthy of execution are things such as adultery, apostasy, witchcraft and sorcery. According to the latest Amnesty report, most people sentenced to death were sentenced on the basis of a signed confession which was extracted under torture.
Of course there is also the case of Saudi blogger Raif Badawi, sentenced to 10 years in prison and 1000 lashes in public for the ‘crime’ of apostasy and insulting Islam among others.
There are also plenty of concerns about the position of women and minorities (including atheists) in the country, making this appointment particularly hard to swallow.

Among the protests against this appointment is that of Michael Sherlock, atheist, author and founder of “Human Rights for Atheists, Agnostics & Secularists”, who announced today that he will be shutting down his organisation as a result stating that the support they have managed to get, is “hardly sufficient to influence an institution that is now governed by an Islamic nation that zealously enforces the laws our organization was established to protest against and eradicate.” Mr. Sherlock announces:

Unless we manage to miraculously gain hundreds of thousands of signatures within the next month our petition to abolish blasphemy laws will be taken down (as of the 30th of October, 2015) and our website and social media sites deleted.

I am among the people who have signed this petition and I would like anyone who reads this post, to go ahead and sign it. Perhaps there will not be hundreds of thousands who will do so in the next month and a half, but it is the least you can do to address this travesty of an appointment.

As much fun as #piggate is, please don’t let September 21 turn into a second April Fools’ day in 2015 and focus on what’s important. Human rights matter a lot more than where the British PM puts his “gentleman sausage”.

I use cookies on this website to give you a better experience by remembering your preferences and repeat visits. By clicking “Accept”, you consent to the use of ALL the cookies.
Please note that I will never sell or otherwise share your personal information.