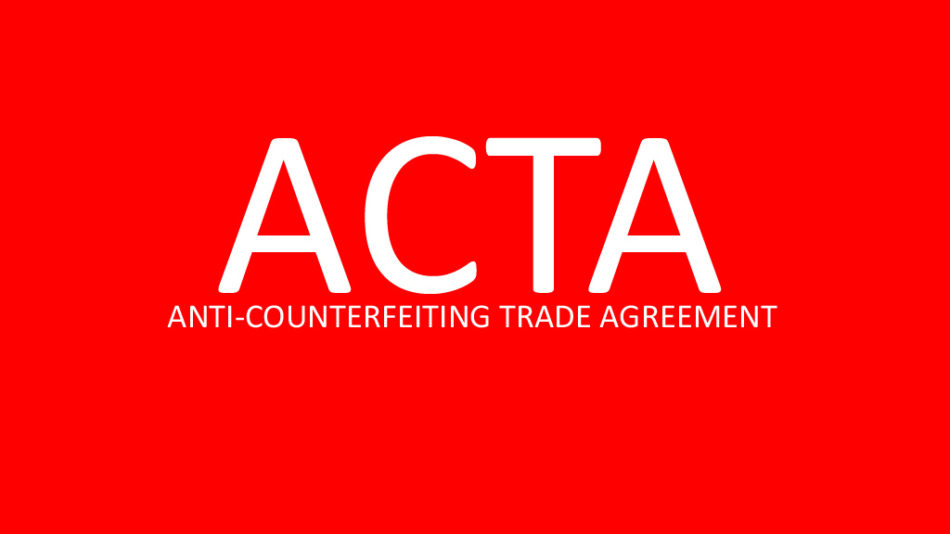 The discussion about ACTA is unfortunately polluted, by both sides, by myths, half-truth and false information. This post is an attempt to provide people with correct information (as far as I can ascertain) about what is true and what is not about ACTA.

For starters, the European Commission has released a document entitled “10 myths around ACTA” in an attempt to reassure the general public and/or quiet the protests and some would say to discredit the protesters as misinformed scaremongers. However, the influential technology blog Techdirt.com has posted an excellent debunk of this document, which makes the contents (if not the motives) of the document by the EC highly suspect. Some highlights of this debunk I would like to share with you below. For the rest, you’ll have to refer to the source.

Myth: ACTA will limit the access to the internet and will censor websites.

Read the text of the ACTA Agreement – there is no single paragraph in ACTA that substantiates this claim. ACTA is about tackling large scale illegal activity, often pursued by criminal organizations.

Its supporters may claim that ACTA is about tackling large-scale illegal activity but nowhere in the document is there mentioned any minimum level for its operation. That is, potentially, it can apply to the actions of a single person, perhaps even sharing a single file, depending upon the circumstances. The problem is, ACTA’s framing is so vague that it’s not clear exactly who might be caught by its terms. Whatever the Commission may say now, it’s how the text is interpreted later that matters.

Finally, while it is true that ACTA will not “shut down websites” directly, there is another clause that is even worse (Article 10):

“judicial authorities have the authority to order that materials and implements, the predominant use of which has been in the manufacture or creation of such infringing goods, be, without undue delay and without compensation of any sort, destroyed or disposed of“

Now, by definition, a Web site “creates” infringing copies when it sends or streams them to users; so lawyers could – and almost certainly will, knowing lawyers – argue that ACTA provides for the destruction and disposal of any computers whose “predominant use” is copyright infringement.

Myth: ACTA is a secret agreement. Negotiations were not transparent and conducted “behind closed doors”. The European Parliament was not fully informed, stakeholders were not consulted.

The text of ACTA is publicly available to all…

The text of ACTA may be available to everyone *now*, but that is after the negotiations have been concluded – in other words, as a fait accompli. Even though the ACTA discussions began in 2006, the first formal draft that was officially released was only in 2010…

A few press briefings and stakeholder conferences are no substitute for actually allowing the public to give some – any – input to the ACTA process. But in the many years of negotiations, there was no possibility whatsoever to do that…

Apart from the participating governments, an advisory committee of large US-based multinational corporations was consulted on the content of the draft treaty…

Quite to the contrary, ACTA is drafted in very flexible terms and contains the necessary safeguards to allow the participating countries to strike an appropriate balance between all rights and interests involved…

Notice how the “myth” has two components, but that the European Commission only answers one of them. The whole treaty is predicated on the assumption that more enforcement is good…

Consider, now, how this might apply to sharing a few mp3s online. According to ACTA, the copyright holders can demand damages equal to the “lost profits” from those mp3s. And if you want to know how the recording industry calculates those, ask Jammie Thomas-Rasset, who was fined $1,920,000 for sharing 24 songs in the US. When that was later reduced to $54,000, the recording industries demanded a retrial because they felt it was far too low…

Myth: ACTA leads to “harmonization through the backdoor”. A study ordered by the European Parliament’s committee for International Trade (INTA) to academics says that ACTA will require changes to EU enforcement legislation and/or to national laws.

If ACTA is compatible with existing EU law – and that remains unclear, despite the Commission’s assertions to the contrary – that’s only so because the whole treaty is so vaguely worded. It is full of options – clauses that signatories “may” implement in certain ways.

And so it goes on. The main impression left behind after reading Techdirt’s debunking is that of wonder. You wonder how such a vague treaty has even made it this far. You wonder why so many essential documents are still being kept secret and what is hidden in them. Perhaps the documents recently coming available from the EC website reveal a portion of what ACTA will mean should it get implemented. You are also left wondering how it is possible that politicians, people who have degrees, people who are smart, people who got involved in politics and are supposed to represent us, can stomp all over our rights so carelessly.

Even more worrying for me, as an opponent of ACTA, is the apparent complacency of most citizens of the EU. Especially here in The Netherlands, it is very difficult to motivate people to take any kind of action. They listen to you, tell you that it’s terrible and that’s where it ends. Even signing a petition seems to be too much effort for some. Apparently they are resigned to have their freedoms taken away.

This website uses cookies to improve your experience while you navigate through the website. Out of these, the cookies that are categorized as necessary are stored on your browser as they are essential for the working of basic functionalities of the website. I also use limited third-party cookies that help me analyse and understand how you use this website. These cookies will be stored in your browser only with your consent. You also have the option to opt-out of these cookies. But opting out of some of these cookies may affect your browsing experience.
Please note that this site is free of advertising, so you will not receive third party advertising cookies, no matter if you consent to them or not.
Necessary Always Enabled
Necessary cookies are absolutely essential for the website to function properly. These cookies ensure basic functionalities and security features of the website, anonymously.
Functional
Functional cookies help to perform certain functionalities like sharing the content of the website on social media platforms, collect feedbacks, and other third-party features.
Performance
Performance cookies are used to understand and analyze the key performance indexes of the website which helps in delivering a better user experience for the visitors.
Analytics
Analytical cookies are used to understand how visitors interact with the website. These cookies help provide information on metrics the number of visitors, bounce rate, traffic source, etc.
Advertisement
Advertisement cookies are used to provide visitors with relevant ads and marketing campaigns. These cookies track visitors across websites and collect information to provide customized ads.
Others
Other uncategorized cookies are those that are being analyzed and have not been classified into a category as yet.
SAVE & ACCEPT
wpDiscuz
0
0
Let me know your thoughts on this post. Leave a comment, please!x
()
x
| Reply