Sometimes, you come across things that make you stop and think ‘say what?’. Today is such a day. I came across this tweet and decided to check it out, thinking it must be a hoax. Turns out it is not but is it entirely up to snuff? 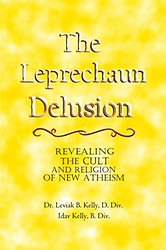 Cover of The Leprechaun Delusion

Granted, I have not read the book and I’m not sure I am going to, as intriguing as the premise sounds. I have to admit to curiosity as to what arguments Dr. Kelly produces that would make this premise even remotely tenable. The press release (submitted by Dr. Kelly himself) doesn’t give away many specifics but does contain a few telling phrases. It mentions among others that the book is written in response to the “New Atheism movement” which Dr. Kelly exposes as a “harmful religious and sociological cult”. It further calls the New Atheism movement an “informally founded anti-theistic group”, popularized by Richard Dawkins, Sam Harris, Daniel Dennett, and the late Christopher Hitchens. These are of course the “usual suspects”.
Dr. Kelly supposedly uses “peer-reviewed scientific papers” to prove that “New Atheism is a dangerous sociological cult movement that mirrors soviet atheism in its early development, and is itself, a religion”.  I’d certainly be curious to see these peer-reviewed scientific papers.

Dr. Kelly is a published author, having also written “Religion, the ultimate STD”, available from Amazon. And here is where things suddenly start falling into place. Checking out this book, I found 17 reviews, most 5 star reviews. There was only 1 really critical review. All but one of the 5 star reviewers had only ever reviewed one book. Can you guess which one it is? Yes, it is “Religion, the ultimate STD”. The one person who left a critical review had reviewed 46 items and apparently engaged the author in discussion about the negative review of the book, but it appears Dr. Kelly wasn’t open to that. I am not suggesting that there is something fishy going on with the 5 star reviewers but it certainly raised my eyebrows.

On GoodReads, it is a similar story. Three glowing reviews, all by people who have only ever reviewed this one book. I think I’m starting to see a pattern.

Looking up Dr. Leviak Kelly on Wikipedia, I was greeted by the following error:

It appears the page on Wikipedia was removed and the discussion about why this is, is also somewhat telling. The conclusion is quoted below.

No evidence found that the author meets any notability guidelines (e.g. WP:GNG, WP:BIO, or WP:AUTHOR) and the article is purely one-sided and POV pushing. His book Religion: The Ultimate STD? is apparently self-published by CreateSpace, and there don’t seem to be enough reliable, independent sources to write a neutral article without merely summarizing what Kelly says in his non-notable book, contra to WP:PROMO. –Animalparty– (talk) 17:55, 31 May 2015 (UTC)

I couldn’t find more reliably mentions of the Dr. Leviak Kelly so I am not sure what to make of this. However, being a sceptic true and true, I think I am going to base my judgement on the above findings and save my money for a book a bit more worthy of it.

As to the premise of the book, it sounds thoroughly ridiculous to me to suggest that atheism is a religion. After all, religion is about belief and purpose in life, neither of which have any bearing on atheism whatsoever. It sounds as if this book is another attempt to misrepresent the admittedly shocking conclusion (for some) at which atheism arrives: that we are alone on this planet, the result of a bizarre yet beautiful string of coincidences and there is no deity looking out for us, watching our back.