If you’ve ever had a debate with someone who is defending his/her faith, you know that it is near impossible to convince a theist to critically examine their position of faith. When you’re an atheist, you usually value reason and logic so you rely on those in a debate. This is the point where your debate begins to break down because theists don’t use reason and logic to support their position. They may say they do but if they actually did, there would be no more theists. Here are a few examples from a recent debate I had, illustrating why theists and logic are a bad combination.

The topic of the debate that sparked on Twitter was the existence of God. I am of the position that we don’t know if some deity may exist but since there is no evidence to suggest there is, we can safely assume that if there is, it’s not relevant. In addition, I consider it beyond a doubt that the God of the Christian bible doesn’t exist. What follows are a few of the arguments my opponent used to counter me and the response to them.

This argument can’t function as an argument for the existence of God because there are lots of things that science can’t disprove. Science hasn’t disproved the existence of Bigfoot, elves or Santa Clause either but no reasonable adult assumes that they exist. The logical fallacy at the heart of this argument is an attempt to shift the burden of proof, which is so nicely illustrated by Russell’s teapot
analogy. 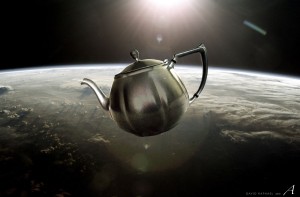 The philosopher Bertrand Russell once wrote that if one were to claim, without offering proof, that a teapot orbits the Sun somewhere between the orbits of Mars and Jupiter, one can not expect to be believed simply based on the fact that no one could disprove that assertion.
This is basically what theists do. They claim a god exists but scientifically speaking, there is no evidence to back up that claim. Science has no method of proving or disproving a god like that of Christianity because such a being would certainly be supernatural.
As Carl Sagan put it in his book The Demon-Haunted World, “Your inability to invalidate my hypothesis is not at all the same thing as proving it true.” Theists often resort to attempts at shifting the burden of proof which is one reason why theists and logic are a bad combination.

2. Many scientists believe there is a creator

My opponent in the debate specifically mentioned Albert Einstein as a believer in a creator. While we know that Einstein was definitely not a theist, calling himself an agnostic instead, it’s important to note that this is not the reason why this is a logical fallacy. What this actually is, is an appeal to authority. While not all appeals to authority are logical fallacies, this one is. For an appeal to authority to be legitimate, the authority has to be an authority in the field under the discussion. For instance if you are debating cancer and your opponent cites a leading specialist in the field of cancer research, he has a fair point. Saying that many scientists believe in a creator is not correct use of the appeal to authority because it leaves too many questions. How many is “many”? What fields are these scientists in? What do their personal beliefs matter when it comes to their scientific work? Einstein especially doesn’t count because he disqualified himself as an expert by claiming to be an agnostic.
Moreover, authorities have to prove their assertions just like anyone else in the field of science. Since no god is scientifically proven, it’s safe to dismiss this argument. Again, theists and logic don’t seem to mix.

3. I don’t need to prove anything 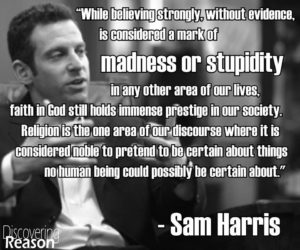 Sam Harris on believing without evidence

At this point my opponent was becoming arrogant. He literally told me that he didn’t need to prove anything because he already knew the truth. As a favourite atheist and science educator of mine, Aron Ra is fond of saying: “if you can’t show it, you don’t know it”. Even if someone is 100% convinced of something that doesn’t mean it is correct or that others should hold the same conviction because of that. If you can’t prove that something is true, you can not expect others to believe as you do. It’s as simple as that. Theists and logic: not a good mix!

4. The existence of God is evident

It is clear that this is not the case. For one, which god would be the one that is evident? The Christian god? The god of Islam? Zeus? There is no reason why an evident god is the same god as the one that you believe in.
Clearly also, the existence of a god is not evident. If it were, we would all believe in god and we would all believe in the same god. The fact that neither is true, disproves that the existence of God is evident. Theists and logic simply don’t go together.

5. All the proof I need, is in the Bible 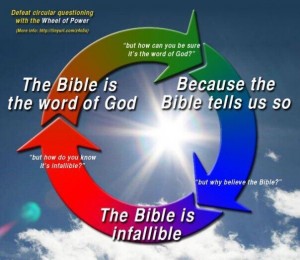 This kind of circular logic will not work…

Why holy books aren’t proof, I have already answered in more detail here. In short, using your holy book as proof of your faith is nothing but a circular argument. It’s impossible to prove anything with logic that runs in a circle of assumptions. In addition, holy books don’t prove a claim, they are the claim. No believer would know about their god if it weren’t for the holy books telling people about that god. That means that the entire content of the faith comes out of the supposedly holy text. There is no other “authority” upon which to claim “knowledge” of god. Again, theists and logic don’t work out well.