Many masses and prayer meetings that I attended when I was still a Christian involved prayer requests, which meant that members of the congregation put forward certain issues that they wanted the assembly to pray for. Quite often, such request would be along the lines of  “Mrs X is still struggling with cancer and she would like us to pray for her again” or “Mr X  still hasn’t managed to find a job”. Even as a believer, these requests and these unanswered prayers struck me as very peculiar.

Why would it be necessary to repeat prayers? Surely an all-knowing god wouldn’t need to be reminded of something? Why would it be more effective to pray as a group? According to Christians, god knows everything, even the things in your heart, so it makes little sense to petition him with a great multitude of people. And yet week after week, millions of Christians all over the world make prayer requests to other Christians without stopping to think about it.

Ultimately these questions became urgent and personal for me as day after day we prayed for a loved one to recover from disease. Despite praying daily, even multiple times a day and making prayer requests which were eagerly granted by other Christians, things only changed for the worse. Ultimately, our loved one did not recover but died after a long, protracted suffering. I found it unimaginable that a loving God would ignore so many prayers.
My questions being as urgent as they were, I spoke to other Christians and to our pastor. Why didn’t God answer any of our prayers, even after literally thousands of prayers had been said by hundreds of people? Even the requests for a merciful death were not answered. Both things seemed to be in direct contradiction to a verse in John 14, 13 – 14:

This seems about as clear a promise as possible. If a Christian asks God to do something in the name of Jesus Christ, it will be done. Except, He didn’t. As surprising as this was to me and should be to Christians, the explanations offered for why our earnest prayers remained unanswered, were even more baffling. You would think that in two millennia of Christianity someone would have been able to come up with some better excuses or rationalisations.
All answers I received to my questions, fell into the following three categories.

We can not know the will/the plan of God 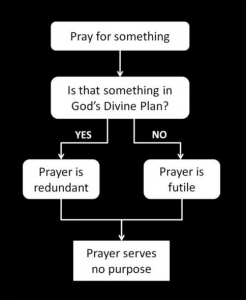 Let us for argument’s sake assume that there is indeed a God who created us and who has a master plan for each and every one of us and that we are kept in the dark about the details. This raises several questions. For instance, if we are kept unaware of this plan, how do we know that there is such a plan? How do we know that God isn’t just winging it? More fundamentally though, if there is a plan for us, what good will prayer do? Do we expect that God will change his plan if we ask? That would assume that God didn’t already know beforehand what the best plan was or the most desired outcome would be. When giving this answer, Christians are effectively negating the efficacy of prayer. Either something we pray for is already in God’s plan, in which case it will happen anyway or it is not in God’s plan so it will not happen no matter how nicely or how often we ask. Either way, it is useless to say a prayer or make prayer requests. This is simple logic. I don’t see how this answer could satisfy anyone except the most muddled thinkers or those with blind faith.

You must trust that God will do what is best

This is quite an assumption. Although Christians are fond of telling people that God looks out for them, loves them like a father and things like that, in reality there is little actual evidence for that being true. Christians have accidents, disease and death, regardless of their faith. Unanswered prayers are a further indication that God may not be doing what is best for Christians at all. After all, what would be “best” about someone getting cancer? What is best about someone dying of hunger, thirst or a disaster?

You might say that we as humans don’t know everything and can’t see all effects of something occurring or not. This argument makes little sense though. Even assuming that God can, it does nothing to explain the way events happen. Perhaps God has decided that a certain person should not be allowed to live for reasons that we can not fathom. Why have this person die a slow, agonizing death? What is best about that? A loving, merciful God would surely choose a more humane way to kill someone. Even we lowly humans kill quickly when performing the death penalty (except in more religious societies). We generally show more mercy than the Christian God.

If God does kill certain people because their continued existence would be worse than the alternative, that makes you wonder why certain people are born in the first place. Think of Adolf Hitler, to take an extreme example. A man who made it his life’s work to exterminate the Jews, God’s chosen people. How come God did not intervene? What was best about the millions of people dying as a result of a terrible genocide?

The more you think about this argument, the less sense it seems to make. Trust is earned, it should not be expected blindly. 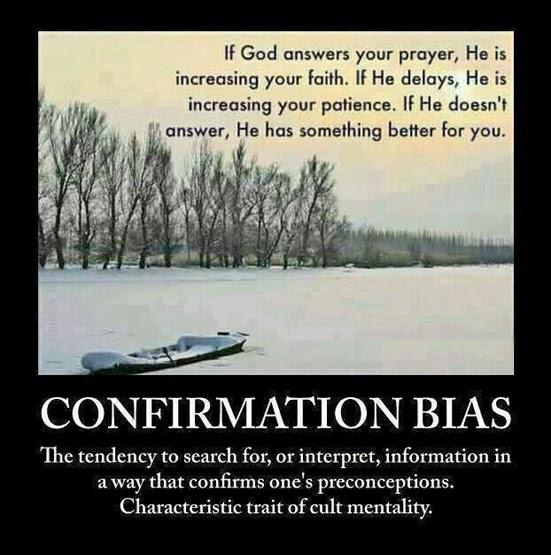 This is the most despicable of the three categories because it shifts the blame from the deity to the believer. God doesn’t answer your prayers because your faith is not strong enough. You don’t believe strongly enough to be worthy. This was certainly true in my case, as the result of the many unanswered prayers that I made. My faith began to wane and I started having serious doubts. However, with all the prayer requests that we made, I was not alone in my prayers. Literally hundreds of people prayed for our loved one to recover. Did they all lack faith? That seems like a stretch. I surely wasn’t the only Christian with doubts but I know Christians who don’t have a single bit of doubt. They prayed with me but it made no difference to God.

Besides, what better way for God to reassure a doubting believer than by performing something that medical doctors said was nearly impossible? If God wants everyone to be saved and to love him, healing the suffering and dying would be an excellent start to show his power and good will to humanity.

Why aren’t unanswered prayers more of a problem for believers?

Logical thinking about my unanswered prayers and the nature of the answers I received, finally led me to unbelief. There was no way I could reconcile these answers with the teachings from the pulpit about the nature of God. They are in direct contradiction after all. It does leave me to wonder though, how come other Christians aren’t worried about unanswered prayers? Why are they satisfied with the kind of weak apologetics that I have outlined above?

The only answer that I can come up with, is the rather unkind answer that they have never really thought about what those answers mean and how they contradict the image most Christians have about God. That, or they are afraid to follow those answers to their most logical conclusion: that prayer is futile and that God, for whatever reason, is not up there looking out for them.
I am curious to hear your opinion. Let me know in a comment, please.

I’ve repeatedly asked believers why god singles out amputees. He NEVER regenerates a limb or heals them of blindness. The only answers they can ever give are the same poor claims you’ve outlined above. The largest study ever done on the effects of prayer on the sick was sponsored by a Christian group, and yet still the study showed that those prayed for did not do any better than those not prayed for. In fact, those prayed for were LESS likely to recover or survive than those not prayed for. Case closed, I’d say!

Personally, I think the question about unanswered prayers is a strong argument against the existence of a benevolent deity at least. Especially when you see the poor apologetic and mental gymnastics required to justify why certain prayers are never answered. Amputees and total blindness are a good example of that.
I think you’re referring to this study?
That research was largely funded by the Templeton foundation.

[…] or for other improbably outcomes. The more mundane the prayer, the higher the chance of success. Unanswered prayers should be a cause for concern for believers. Finally, I took my doubts […]