Why is atheism so unbelievable? It’s something that I can’t for the life of me understand. Personally, I think it should be the default position of anyone who purports to be sane. Even in the Netherlands, which is now largely a secular country, I’m still told: “Well, you have to believe in something?” The last word gets the emphasis, indicating how strange it is thought not to believe in anything.

Of course, being an atheist doesn’t mean I don’t believe in anything. It’s just that I believe in things for which there is ample reason to believe they are true. I believe the sun will rise tomorrow. I believe that if I drink water, I will no longer feel thirsty. Why do I believe these things? Well, there are several reasons, really.

It’s my opinion that the above criteria make for at least plausible reasons to believe something will happen. While they may not be 100% foolproof, they will work in the vast majority of situations. I know that water works against my thirst, other people corroborate this knowledge and biology confirms I need water to survive. Additionally, biology can predict what happens if people don’t drink when they need to and the results are always the same. What more evidence could one require? The belief that water will cure my thirst is a realistic belief.

Obviously, people who find atheism unbelievable are not talking about this kind of realistic belief. “You have to believe in something” refers to something much more vague and esoteric. They are referring to the type of belief that doesn’t have all three supporting pillars mentioned above. One or more of them are missing, which make this kind of belief more unrealistic. 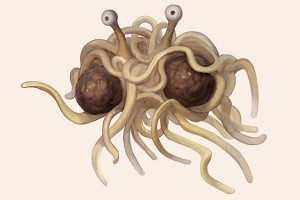 My response to the exclamation “you have to believe in something” is usually along the lines of “why?” This is most often met with incredulous looks and the follow-up exclamation “You can’t believe that this is everything there is? Isn’t there more between heaven and earth?” Well, like what exactly? God? Jedi knights? The Flying Spaghetti Monster? Why shouldn’t this earthly existence be all there is? Isn’t there enough mystery and awe in the world in which we live? I know it’s not a nice thing to face the fact that for each of us, there will come a day when our existence comes to an end and that we will die. Is that such an uncomfortable fact that we must fool ourselves into thinking that the world is not as it seems?

The problem I have with that kind of wishful thinking, is that it is unrealistic when you take into account the three pillars of realistic belief I outlined above. In my personal experience, there is nothing which would indicate there is more to our physical reality than the things we can see, hear, smell, touch and taste (or measure scientifically). I’ve heard people who I’d consider reliable, claim they have experienced the supernatural in some form or other. However, there’s nothing in science that would confirm that the supernatural exists. That means I’m forced to conclude that the people I thought reliable, were under some kind of misapprehension since all I have to go on, is their word. Many events may appear supernatural if you don’t examine them closer or if you don’t understand how something could have happened so that isn’t an illogical conclusion on my part.

People may find it overly sceptical, unromantic or too material to think in this way. That may be so but for my part, I see absolutely no merit in thinking about reality in any other way. What could possibly be the point, beyond wishful thinking, to treat our perception of the world differently? To me, the idea that atheism is unbelievable, is unbelievable.