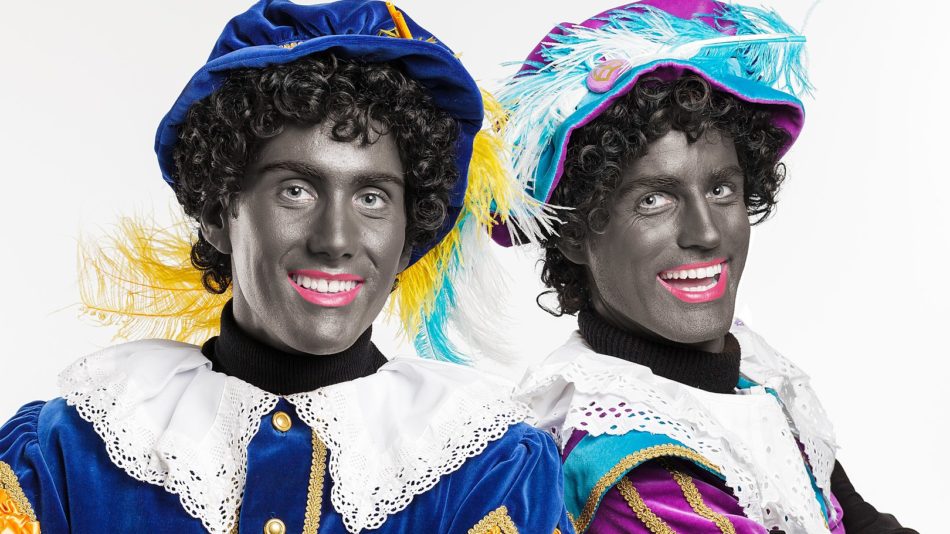 Each year the discussion rages again in the Netherlands: Zwarte Piet, innocuous expression of Dutch tradition or horribly racist? In this post, I give you my opinion on the matter. Insofar as it can be heard among the din of arguments pro and contra “Zwarte Piet”.

A bit of background

The figure of Zwarte Piet (Black Pete in English) first appeared in 1850, in a book by Amsterdam school teacher Jan Schenkman. Schenkman is remembered mostly for his writing of several songs about the Dutch holiday of Sinterklaas (Saint Nicholas). Every year the legendary figure of Sinterklaas boards his steam ship in Spain and sails for The Netherlands. Arriving by mid November, he is greeted with great enthusiasm by the children in the Netherlands because he comes bearing many gifts and sweets. On Saint Nicholas’s eve (December 5), these gifts are distributed to the children.

If some of my US readers think that this sounds somewhat familiar, you are correct. The figure of Sinterklaas (Saint Nicholas) is the basis of Santa Claus (Saint Nic). To do all the hard work, Santa Claus has his elves. Sinterklaas on the other hand, has his “Pieten”. They take care of sailing the steam ship, wrapping the gifts, distributing them to children and everything else that needs doing. It’s this division of labor in combination with the portrayal of Zwarte Piet that is the cause of the controversy.

The portrayal of Zwarte Piet

Zwarte Piet is typically depicted as a black individual, dressed in the colorful Renaissance attire of a Moor from Spain. People portraying Zwarte Piet, typically put on blackface make-up, have exaggerated red lips and wear curly haired wigs. In addition, they act jovial, sometimes perform acrobatics and above all they play dumb. If this description makes you cringe, you are not alone. The comparison with slavery is a facile one but unavoidable. A white guy on a horse surrounded by caricatures of black men who do all his work for him? The exaggerated racial stereotype comes from a time before the abolition of black slavery in the United States and seems seriously outdated for the diverse society that calls The Netherlands home.

I should point out that most Dutch people intend absolutely no offense with this portrayal. Zwarte Piet is black from sliding down the chimney so often to deliver the presents at night. Parents explain that the skin color is from soot in the chimney. Most Dutch people are in support of keeping things as they are and don’t want to get rid of the figure or change it significantly. The traditional Sinterklaas holiday is an important cultural tradition to them. The linked poll from 2018 shows that 68% of respondents are in favor of keeping Zwarte Piet black. However, it’s a different matter when you ask people from Suriname or the Netherlands Antilles. This group in Dutch society is overwhelmingly in favor of changing things (73% of respondents). A poll from 2017 shows similar results.

There doesn’t seem to be an easy answer to this discussion. One thing is for certain though: it doesn’t help the image of The Netherlands as a tolerant nation, a nation where all people get the respect they deserve. Increasingly, the discussion draws international attention not only from the UN but also from personalities like Kim Kardashian. When she tweeted about it, it immediately sparked a debate on Twitter where some rallied to defend the tradition while others condemned it as racist.

Now I am not saying that The Netherlands should change because Kim Kardashian says so. Hysterically shouting that a country should change a 150 year old tradition isn’t going to work. On the other hand, hysterically clinging to tradition isn’t going to work either. It is important to recognize that you can be racist without intending to be racist.

It’s probably an unpopular statement with my Dutch readers, but I regard the Zwarte Piet phenomenon as an example of institutional racism. Even if it is not meant to offend, that doesn’t really change things. While I believe people should not be sheltered from being offended, I also think that we should try to show each other respect. If someone says that something is hurtful to them, does it hurt us to take their feelings under consideration? Institutional racism is far more subtle than individual racism because it has become embedded in an institution or a culture so deeply that people fail to recognize it. That is what makes it so hard to root out.

It is obvious that calling something a tradition doesn’t make the practice acceptable. If it did, there would be no one protesting bull fighting. Nor would there be anyone protesting genital mutilation, which after all is a religious tradition. Traditions should never be above criticism.

The defense “it’s tradition” sounds increasingly flimsy when we see that the figure of Zwarte Piet has already changed significantly and seemingly without much discussion. Originally, the controversial figure was much more of a bogeyman who rewarded good kids with candy but punished the bad kids. Piet carried a birch rod to beat naughty kids and the worst cases were put in a burlap sack and taken to Spain where they had to work for Sinterklaas until they had mended their ways.

As corporal punishment fell into disuse and eventually became outlawed in The Netherlands, the birch rod and chain disappeared and children were no longer abducted to Spain. What remained was the friendly Piet who gives children candy.

Other traditions have disappeared

It’s not like other Dutch traditions never changed either. Some even disappeared altogether. In former times, Dutch people engaged in traditions like goose pulling, a game where contestants did their best to pull the head off of a goose. Often, the animal was still alive when the cruel game started. To make things more difficult, the neck of the goose was sometimes greased so that contestants couldn’t get a firm grasp, prolonging the agony and torment for the poor goose. We also had the tradition called “cat clubbing”, where a living cat was hung up in a cloth bag which was then beaten with clubs until the cat inside was dead.

These traditions disappeared because people finally realized they were cruel and lacked respect for animal life and suffering. It took time for them to go away but eventually they did. If someone would suggest a game of goose pulling now, howls of outrage would follow and rightly so. Such games belong to less enlightened times. Why then is it so hard to change the Dutch mind about Zwarte Piet?

Sinterklaas can go on

I’m Dutch myself and I grew up with the traditional Zwarte Piet, carrying the birch rod. Still, I have no problem with changing the character so that he becomes more easily acceptable. After all, Sinterklaas is about the children: all children, white, black or any other ethnicity. We can still have Sinterklaas and enjoy it more. If we can show animals like geese and cats respect by not torturing them to death in horrible ways, surely we can learn to extend some of that respect to people who feel offended at our portrayal of Zwarte Piet?