Creationists argue that mankind was created in God’s image, because the Bible says so in Genesis 1:27: So God created mankind in his own image, in the image of God he created them; male and female he created them. They take this to mean that we humans resemble God.

Let’s forget for a moment that this is a pretty fanciful claim, seeing as no one has ever seen God (John 1:18), even though Moses spoke face to face with God (Exodus 33:11). I’m not that interested in biblical contradictions now. I’m more interested in what should be obvious to anyone not looking at the world through creationist tinted spectacles.

If we look like God, and we were created that way, explain this: 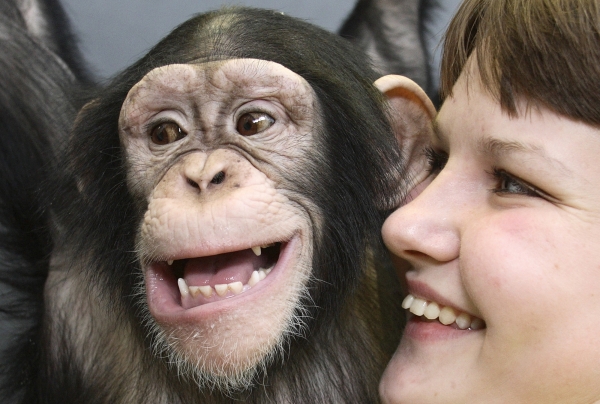 No, I am not trying to be mean to the woman or insult her. Look at it any way you want, but don’t you see this similarity? Forget about the facial hair for a second. There are obvious points of similarity. And there’s more. 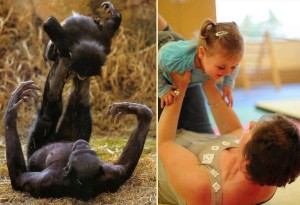 Not only do we look like chimpanzees and they look like us, we behave similarly too. I’ve played this game with my children, just like countless parents have. And countless chimps have.

Or look at these examples, which display uncanny similarity: 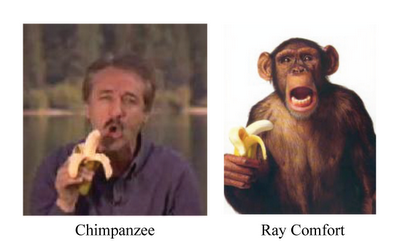 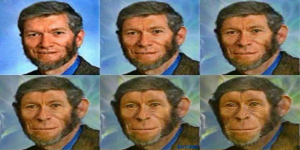 Ken Ham and his ancestors

Okay, I admit those last two were cheap shots (they were funny though). Seriously, if apes look like us and we were created in God’s image, doesn’t that mean that apes also resemble God? And that God must resemble an ape? It certainly would explain why God goes ape every time somebody decides to worship some other god. He’s the big Silver-back Gorilla in the Sky and don’t you forget it!

“Worship the wrong God one more time, I dare you!”

So God created mankind in his own image and the great apes too, sort of. Your move, creationists!

Or you could just accept the fact that humans and the great apes share a common ancestry, which makes a lot more sense.