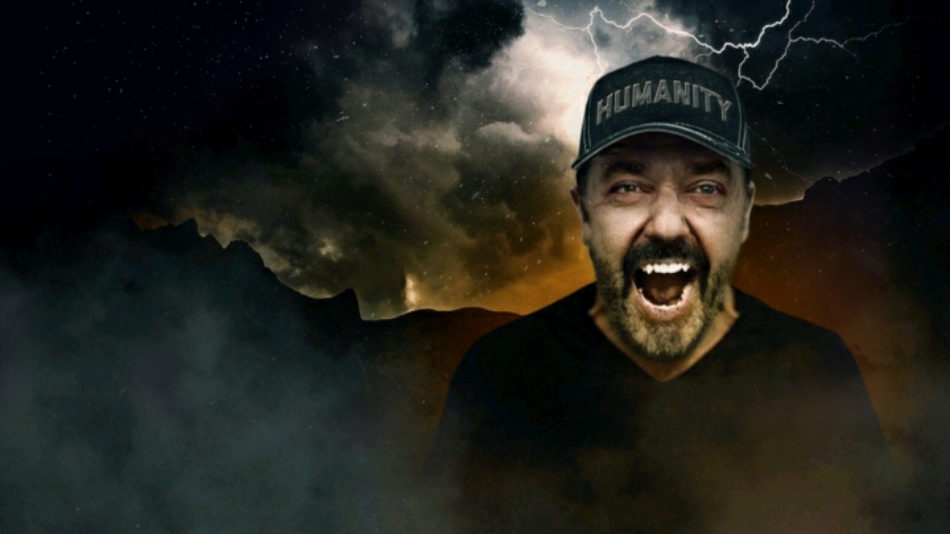 In 2018, British comedian Ricky Gervais released a comedy special on Netflix entitled: “Humanity“. In the intro, he commented on the title: “I don’t know why I called it that. Not a fan, to be honest.” Recently, it’s a sentiment I find myself sharing with Ricky Gervais.

I can’t pinpoint to anything in particular but I find many people annoying and tiresome. Whether it’s stupidity, gullibility, insincerity or how everything is “offensive” these days. Maybe it’s their refusal to take responsibility for their actions or the way we simply can’t have privacy any more. Or how service is out the window and you’re just a number, a consumer to major companies.

Since childhood, I’ve often felt apart from the human species. I sometimes pretended that I was an alien sent here to observe humanity. Quite honestly, my reports would say that it would be best if my species just stayed away.

As the saying goes, only two things are without limit: the universe and human stupidity. And we’re not certain about the first. Stupidity takes many forms unfortunately and I’ve complained about it here before. Back then, things like stupid warning labels made me annoyed. Now? I’m still not a fan of stupidity but now it just makes me feel tired and longing for a time when common sense was still a thing.

What’s also very worrying to me is how we are more interested in the latest model iPhone or that one new TV show while at the same time a climate disaster is looming around the corner. Don’t we have more important stuff to worry about? Shouldn’t we be looking at fixing our societies, a more fair distribution of wealth and opportunity? Better health care and education?

Gullibility is the little brother (or sister, if you prefer) of stupidity. The amount of people who believe that Covid-19 is caused by 5G antennas just boggles the mind. Just as the people who think Bill Gates is going to inject you with a chip if you get vaccinated. Famous people on social media, with no background in virology, pandemic research or even basic biology whatsoever made claims about the virus origin or possible cures. Lots of people readily believe this nonsense, leading to more confusion and worse, more hospitalisation and death. The willingness with which people believe this kind of misinformation astonishes me. But then again, I am no stranger to how readily people believe baseless assertions. Critical thinking skills are more important than ever.

Insincerity is a big issue for me. Often I hear people say things such as “if you need anything, let me know.” When you let them know you need something, they don’t have time, don’t respond or try to make an excuse. The phrase “I’m here for you” is often as hollow as the inside of the skull of the people I discussed above. I know these words are often just politeness. But there are people who may believe you when you use these words. I’m no longer one of them, though.

Fact of the matter is that if you want an actual friend, a reliable companion or someone genuinely happy to see you, get a dog. Dogs are better people than people. Their attention and affection is always sincere.

This seems to be everyone’s new hobby these days: looking around the internet, social media or news for something to take offence at. Say something wrong? You’re cancelled! Did you say something wrong 20 years ago? You’re still cancelled! When I heard that Jay Leno said that comedians need to change their jokes to stay with the times, I was horrified. Often jokes are funny precisely because they’re slightly offensive! Giving in to the small but loud minority of the ‘professionally offended’ means the end of comedy. Several years ago, Rowan Atkinson took a much braver and wiser stance: we have to be free to insult each other or risk losing a lot of cultural expression.

The word responsibility is almost a dirty word these days. People have their mouths full with words such as ‘freedom’ and ‘rights’. But they don’t seem to realise that freedom comes at a price and that rights come with responsibilities. Just because you’re free to do something stupid, doesn’t mean you should go do it. And if you do it anyway and things go bad, it’s not the fault of the government or an industry. You made the choice so you should take responsibility. It’s your job to educate yourself before you decide to do something that entails risk.

I almost feel like I don’t need to explain this one. I’ve written enough here about our loss of privacy. A few years ago, I’d get angry at the results of studies about smart phone privacy. These days, I just shrug and nod knowingly. I’m honestly considering just getting rid of my personal phone altogether, I’m that disgusted by the state of things. Although..there may still be an option to have both a mobile phone and a modicum of privacy.

You are caller number…

I’m old enough to remember that calling a large business actually worked. The phone rang and a person answered who could help you. These days, a computer answers the phone and tells you how much company so and so appreciate you, the dear customer. Then you go to a menu so convoluted you have to hang up and retry several times before you’re in the right queue. But you’re not out of the woods yet!

Next you are exposed to music that is so awful you have to resist the urge to claw your ears off, periodically being reminded about your position in the queue. Worse still, there is the repeated admonition that answers to frequently asked questions can be found on the website, making you feel guilty you called. And when finally, after 20 to 30 minutes of sheer torture on hold, you are put through to a customer service representative. But this isn’t an employee of the company! No, this is probably a student who is trying to make some extra money and who isn’t authorised to actually do or approve anything for you. All they can do, is open a ticket. And if you’re lucky, there will be a response to said ticket in the future.

How is this “valuing my business”? No matter how many times you tell me “your call is important to us”, all I hear is a big, fat “fuck you”. How did we ever get to a place where this is normal?

Sorry humanity, I’m not a fan. You have your perks, I admit. But more often than not, you make me angry, sad and frustrated. You are capable of incredible feats of beauty and creativity but you’ve also invented autotune. There’s a few of you I care a great deal about but most of you…as I said: not a fan. Ah well, nothing a stiff drink won’t fix, I suppose.