I stumbled upon an absolute gem of a video series on YouTube. It is called “Does God Exist? – Many absolute proofs!” and is a production of the Restored Church of God. The series is presented by a man called David C. Pack, who is Pastor General at the Restored Church of God. Does this series contain the many absolute proofs of the existence of God? Prepare to be seriously underwhelmed.

I’ve sat through the first half hour of this 2 hour long series and I can safely tell you that not a single proof is demonstrated. If you watch the video, you’ll see David C. Pack utterly embarrassing himself to an extent you’ll feel ashamed in his stead. The half hour that I saw, is nothing but a long line up of straw man arguments, non sequitur logic, poor understanding of science, misrepresentation of science and sheer stupidity. The video is embedded below but don’t blame me if your brain starts leaking out of your ears.

For those of you not willing to risk brain damage, here are some of the points the video makes and my commentary on them.

The video begins with a misrepresentation of atheism. Pack says that atheists say that God doesn’t exist but this is of course false.  Atheists do not claim that God doesn’t exist, atheists say that there isn’t sufficient  evidence for the existence of God so they don’t believe. We’ll reconsider once the proof comes available. Of course “the fool has said in his heart, there is no God” is mentioned. Thanks, Dave! Fortunately, no atheist I know is as big a fool as you’re about to make of yourself. 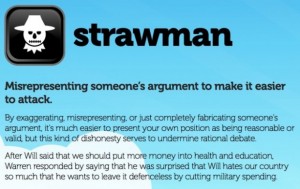 A straw man argument if I ever saw one…

Next, we go after evolution because apparently the question of Gods’ existence is closely tied to the question of how life began. We hear arguments as “evolution requires more faith than believing in God” and “no true facts have been found to support it”. (Are there false facts?) That’s an often heard fallacy among creationists and it’s simply not true. See an earlier article on this blog for more.

Pack then asserts that science proves God and that scientific facts point to Gods’ existence. Since he has already demonstrated he doesn’t understand evolution, this ought to be good…

The source of Pack’s argument that science makes the case for God, is revealed to be a Wall Street Journal article: “Science Increasingly Makes the Case for God”, by Eric Metaxas and published on December 25, 2014. Unfortunately, the article is behind a pay-wall. A newspaper article written by someone who is not a scientist is not exactly the most reliable source to base your argument on, but let’s follow along.

The proof for the existence of God

This concludes the arguments for Pack, who goes on to confidently claim that “we have established that creation demands a creator”. In reality though, he has not achieved anything remotely like it.

With the foundation laid, Pack gets ready to deliver some “amazing, scientific proofs” of creation. Are you ready?

This video is simply painful to watch as David C. Pack piles one non sequitur upon another, puts up strawman after strawman, misrepresents pretty much all of actual science and just generally makes a complete fool of himself. What’s worse though is that he fails to provide any proof of God’s existence. There’s not s single good argument in the whole half hour. Not once do you scratch your chin and go “hm…”. There are absolutely no redeeming qualities unless you enjoy watching someone humiliate himself without realizing it. This first video is actually so bad that I am not going to bother with the rest of the series because I might risk real brain damage from just watching. The mere thought that this man has a following who soak up every word is too scary to mention.

[…] to provoke and I discussed with believers on Twitter and here too. When I started debunking a particularly bad video series produced by the Restored Church of God, I found that another active atheist by the name of Aron Ra […]

Hahaha, this was Exactly where i was looking for, he also said somthing like: ‘You can not have something, slowly come in to existence from nothing’ . WELL HOW THE FUCK WOULD ‘GOD’ DO IT THEN DUMB ASS!

Then he states that a normal person can’t. Even with her Creative power.

And after all of that: ‘Be honest, Exept facts. Again this is proof of the existence of a great creator.’

Give up live please you can see your god with your own facts Kappa.

Absolutely. David C. Pack is a buffoon and it’s hard to tell whether he actually believes this stuff or if he’s just preying on the gullible with his preaching. It’s both sad and scary that people take this man’s lies and half-truths as fact.

Thank you thank thank you THANK YOU!!! My brain started melting and blood was coming out of my eyes! I scrolled to see the comments because I needed to see people arguing against all this nonsense!!! But they blocked the comments not surprisingly! I don’t know what I expected I think I clicked on it cause it was an ad! I received this as an ad! I’m an atheist I respect and kinda admire people who believe in god but this guy makes a fool of himself and it sad.

Thanks for reading and leaving a comment! Yes, it *is* sad to think that there are actually people out there who buy these videos and believe anything that comes out of Pack’s mouth. I don’t know if he really is this scientifically illiterate or if he is deliberately misrepresenting scientific discoveries to further his own agenda, which obviously seems to be spreading the gospel. Both options are depressing…

This website uses cookies to improve your experience while you navigate through the website. Out of these, the cookies that are categorized as necessary are stored on your browser as they are essential for the working of basic functionalities of the website. I also use limited third-party cookies that help me analyse and understand how you use this website. These cookies will be stored in your browser only with your consent. You also have the option to opt-out of these cookies. But opting out of some of these cookies may affect your browsing experience.
Please note that this site is free of advertising, so you will not receive third party advertising cookies, no matter if you consent to them or not.
Necessary Always Enabled
Necessary cookies are absolutely essential for the website to function properly. These cookies ensure basic functionalities and security features of the website, anonymously.
Functional
Functional cookies help to perform certain functionalities like sharing the content of the website on social media platforms, collect feedbacks, and other third-party features.
Performance
Performance cookies are used to understand and analyze the key performance indexes of the website which helps in delivering a better user experience for the visitors.
Analytics
Analytical cookies are used to understand how visitors interact with the website. These cookies help provide information on metrics the number of visitors, bounce rate, traffic source, etc.
Advertisement
Advertisement cookies are used to provide visitors with relevant ads and marketing campaigns. These cookies track visitors across websites and collect information to provide customized ads.
Others
Other uncategorized cookies are those that are being analyzed and have not been classified into a category as yet.
SAVE & ACCEPT
wpDiscuz
7
0
Let me know your thoughts on this post. Leave a comment, please!x
()
x
| Reply
Loading Comments...